The wind howled outside the dilapidated tent...

...as three of us huddled restlessly inside, praying the thin nylon would remain intact. Suddenly my eyes opened wide with epiphany.

“I’ve got the perfect name… I’m gonna call it Section 8!”

You see, I was in a bit of a delirious state. Several days earlier we had been anxiously awaiting a helicopter to pull us off the Franklin Glacier after what was supposed to be a ten day ski touring adventure around Mount Waddington, a remote, heavily glaciated area in the Canadian Coast Range. It had been a good trip but we’d had our fill of adventure and were definitely ready to head back to civilization. Our minds now securely fixed on the idea of a giant burger and a cold pint at the pub before the long road trip home. 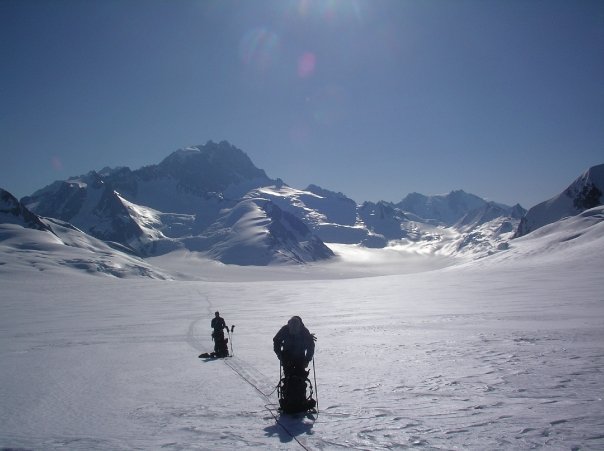 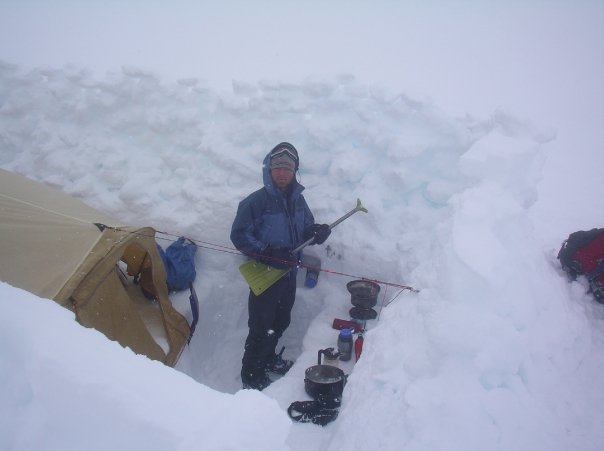 It was day #10 and the chopper was mysteriously late so my friend Paul and I decided to make our way up to the saddle at ‘Fury Gap’ where we hoped to get radio contact with the pilot. After a couple hours skinning our way to the col we saw the chopper buzz over our heads towards camp. We scrambled to switch to ski mode and rushed back to camp as quickly as our exhausted little legs would take us.

Upon arriving, our 3rd adventurer, Chris was busily breaking down camp, panicking to get everything in the heli. The pilot had a concerned look on his face and insisted we get moving ASAP! After the fastest packing job you’ve ever witnessed, I’m seated in the bird buckling up as Paul turns to me with a look of relief and says… “well at least he’s not going anywhere without us now.”

I’ll never forget those words as it wasn’t 30 seconds later when the pilot jumps in and says “sorry guys, you’ll have to get out.” The weather was coming in fast and the one remaining hole in the clouds was too high for him to fly with all our weight. In disbelief, we pull our stuff out and huddled next to the machine. As he disappeared through that hole in the sky we hear the words, “I’ll be back when the sky is blue” crackle over the radio… little did we know that wouldn’t be for another 6 days.

Waiting out the storm in that ragged tent with no food and nothing to keep us entertained led to an awful lot of thinking. An ‘awful lot’ is probably an understatement! I had concluded that if and when we got out of this mess, I would finally propose to my long time girlfriend… and perhaps it was time to move from our little basement suite in Whistler and go back home to Vancouver Island. I was excited at the prospect, “I could start my own ski instructor school… but do things a little differently.” I thought, “many ski instructors we’re too one dimensional… I didn’t want them just to look pretty on a groomed slope!”  I dreamed up a boot camp style training course called the ‘SLT’ (Snowsport Leadership Training) to develop really well rounded ski professionals. We’d push their limits cramming in as many disciplines as possible, and we’d combine ski instructor training with outdoor education.

And with that, Section 8 was born… but why on Earth call it Section 8? Well, that’s a bit goofy really. When I was a teenager, my friends and I created a bit of a cult following around an ultra-cheesy movie called “Ski School.” If you haven’t seen it, I highly recommend you watch it…  (Here’s a Trailer) but do so without expectations. It’s the kind of flick that’s so bad, it’s good, if you know what I mean. It really is essential viewing though if you want to claim any sort of insight into skiing culture.

Anyways, We would watch this movie religiously every weekend, usually late at night after returning from whatever teen social event we attended that evening. We had virtually every line memorized, and embarrassingly, I still quote many of the classic one liners today. To give you the gist… the bad guys we’re ‘1st Section’… The hot tubbing heroes… ‘Section 8’ of course!

The name is a bit of a double entendre, the term Section 8 was historically used in the US military for those who had gone off the deep end and were presumed mentally unfit for service. For fans of the classic TV show M.A.S.H. you’ll recall the character Clinger, who constantly wore a dress in hopes of being sent home on a ‘Section 8’ discharge.

In an obscure way, this all fits pretty well with our teaching philosophy here at Section 8 as we try not to take ourselves too seriously. The plague that stifles learning in so many students and instructors is either fear, or a tendency to over analyse the intricacies of technique… when most often the best learning is simply experiential.

On that note, I’ll finish up once again with our favorite tagline: “In order to be the best… You must lose your mind!” You guessed it… quoted straight out of ‘Ski School the movie.’

Section 8: A category of discharge from the United States military when judged mentally unfit for service.
Section 8: A group of ragtag characters from the 1990 cult classic film ‘Ski School’ who win the day… and the all the babes!
Section 8: A team of snow sport professionals based on Vancouver Island, Canada. Creators of the infamous SLT program, ridiculously fun all mountain ski improvement camps... and 'Revolutionary' dance moves.